You are here: Home » Books For YOU » The Making of Billy McErlane » Zappa’s Mam’s a Slapper – Press Pack

Mandrill Press announces the publication of:
Zappa’s Mam’s a Slapper
by
John Lynch

Billy McErlane wants to be the world’s only recluse celeb. Having gone to jail at the age of fourteen for the murder of his stepfather doesn’t make it easy and nor does having a harlot for a mother, but when he is reunited with his childhood sweetheart peace enters Billy’s heart. Then fate deals a wrecking blow. The last thing Billy needs is Dillon, a four-year-old with a background as unpromising as his. A bittersweet story of love, loss and one young man’s refusal to accept what life offers.

John Lynch is an international salesman. He has lived and done business on every continent except Antarctica and knows Lagos, Jeddah and Abu Dhabi as well as the Shropshire countryside where he now lives. As R J Lynch he also writes the James Blakiston Series of historical crime/romance novels set in the 1760s.

Zappa’s Mam’s a Slapper is scheduled for publication 1 February 2015. 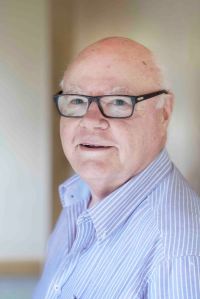 John Lynch was born in 1943 and brought up in Newcastle upon Tyne where he attended Heaton Grammar School from 1954 till 1961. He now lives in rural North Shropshire. Between those two British homes his career in international sales has taken him to every continent except Antarctica. Until a year ago he was employed full time by the American company Ennis-Flint as Sales Director for Africa and the Middle East; when he reached the age of 70 he decided to take a step back and he now works 26 weeks a year covering the Middle East. He has been a writer for many years—in 1953 at the age of ten he stood on the stage in the assembly hall at Benton Park Primary School and read to the assembled pupils and their parents a story he had written. It gives him pleasure to know that a classmate still recalls being nagged all the way home by his mother demanding, ‘Why can’t you write like John Lynch?’ You can listen to a 1983 recording of his short story, Bird, read on the BBC’s Morning Story by Heather Bell, here. He says of Bird, ‘my mother was impressed that her son’s story was on the radio, but not as impressed as she was by the fact that it was being read by Clarrie Grundy from The Archers.’ There have also been a number of published books, stories and articles; he says the one he enjoyed most was Managing the High Tech Salesforce. ‘People kept saying, “You write just like you talk” as though I had somehow cheated—they had no idea how hard it was to develop a style that gave that (completely false) impression.’

John has published under other names in the past to keep separate his working and private lives, but now writes as R J Lynch and John Lynch. ‘The books I write as John Lynch are set in the present and meant to say something about Britain in the 21st century. As R J Lynch, I’m writing romance and detective stories and indulging my passion for history.’

An interview with John Lynch

You talk about yourself as having lived and worked on every continent except Antarctica, but you grew up in Newcastle. You don’t sound like a Geordie.
I do if I spend any time there. I was eighteen when I left Newcastle and twenty-one when I left England entirely for the first time. I had to speak more slowly and clearly in the West Indies, just to be understood. Since then I’ve had extended spells in Africa, America, other places. None of them would have welcomed a supplier they couldn’t understand. You can’t speak Geordie slowly—try it and see.

And now you live in Shropshire. How did that happen?
My in-laws lived nearby and they spotted a house that the Bradford Estate wanted to sell. It was two farm labourers’ cottages knocked into one and extended sideways and upwards. It needed a lot of work but we were able to buy it for next to nothing, A few years later we moved to Ball Lane in Maesbury because we’d had a third child and we needed a bigger house, and thirteen years ago we came where we live now.

You downsized?
Yes. Tom, our youngest, had left to go to university and we were bobbing around in this great big house with an acre of garden and we thought, with the children gone, that was the time to move. Didn’t do any good, though—they found us.

How do you like it there?
Love it. It’s funny, because my first contact with Shropshire was when I was ten and I used it in a story that I ended up having to read at a primary school open day. I’d only put Shropshire in because I liked the sound of it—I hadn’t a clue where it was. It was as though the place had some kind of hold on me, even then. I’ve been based there now for 32 years and I can’t imagine living anywhere else. I go to work in Saudi Arabia, or Johannesburg, or Suriname, or Qatar, or Iraq, or Libya, or Abu Dhabi—all places I’ve been to in 2014—and then I fly into Manchester Airport and when I’m close to home I see the backdrop of the Berwyns and I think, I’m home.

Where do you get the ideas for your books? Zappa’s Mam’s a Slapper for example; where did that come from?
The short answer is: I don’t know. When I started Zappa’s Mam I wrote the first sentence—All I’d said was, I wouldn’t mind seeing her in her knickers—and then I sat there thinking, “Where on earth did that come from?” Soon after that I became aware that there was someone in the room with me and it turned out to be Billy, the central character in Zappa’s Mam, and he was telling me what to write. “Tell them about the anger management.” “Don’t forget the arboretum.” “Poppy wouldn’t have said that—she’d have said it this way.” And so on. So you could say I didn’t write the book at all; Billy did. I realise that that makes me sound nuts and it gets worse because my next book will be When the Darkness Comes and for that one I’ve had more people in the room talking to me. At one point I had John Betjeman and Barabbas there and, yes, I do know they lived 2,000 years apart, and then Haile Selassie showed up because he had a bone to pick with Barabbas and the whole thing ended with Barabbas getting so mad he punched Betjeman in the face and knocked his teeth out. All of that goes on when I’m writing. And it finds its way into the books. But I’m not nuts. Not really. Ribbit.

You mentioned the first sentence of Zappa’s Mam and it will make people think the book is about sex. It isn’t, though. Is it?
There are no graphic descriptions, if that’s what you mean. I assume that my readers know what it is that men and women do when they’re feeling affectionate and they don’t need me to describe it for them.

You’re 71. You’ve lived what most people would think a very interesting life. Are you conscious of growing old?
How could I not be? Show my granddaughters a picture of me when I was young and they say, ‘That’s not Grandad.’ Ask them why and they say, ‘Because that man has hair and he’s skinny.’ Neither of those things is true today.

Do you mind?
I’d like to be able to run three miles the way I once could. When I watch cricket, say, I’d love to be on the field instead of in the stand. But everyone goes through it. “Youth’s a stuff will not endure.” “They are not long, the days of wine and roses/Out of a misty dream/Our path emerges for a while, then closes.” I’d better stop—I’m making myself sad.

Do you fear death?
No. Whatever for? For my historical fiction I spend hours going through old documents, mostly from the sixteen and seventeen hundreds, looking for details of how people lived, what they thought and what happened to them. I’ve accumulated I don’t know how many stories about people. So many, I don’t suppose I’ll ever use them all. Some of them lived fascinating lives and I don’t know why some didn’t die of boredom, but they all have one thing in common: they’re all dead. Dying is what people do. I have dinner in Newcastle once a year with two guys I was at school with more than fifty years ago. As one of them said, ‘It may take thirty years and it may be next week, but that’s the finishing line we’re looking at.’ He’s right. A human life is an arc and at 71 you’re on the downward slope. That’s how it is. My hope is that I’ll keep my faculties to the end and that death won’t be painful when it comes. But fear it? The fact of being dead? No.

Thanks for talking to us.
(Laughs) Talking is never a problem for me. Thank you for listening.

Back to Zappa’s Mam’s a Slapper