You are here: Home » Gamache Jumps the Shark 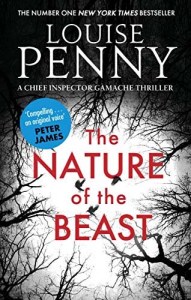 The Nature of the Beast is the 11th book in Louise Penny’s books about Chief Inspector Gamache. I’ve read all of them. I was delighted when I found the first, and I went on to read subsequent books in the series with pleasure. But the pleasure has been fading for a while, as Louise Penny reached the point that all crime writers eventually reach when they write repetitively about one detective – the point at which readers know that the series should have stopped at least two books ago.
And that is The Nature of the Beast. Penny has done the little village of Three Pines to death, and she’s flogged the life out of all of the main characters, too. I believe that another book is scheduled. I won’t read it, and I hope with all the warmth I feel towards Louise Penny as a writer who has given me immense pleasure that she will realise that her hero’s time is done and that she should write no more about him.
Two stars. Failure. In the name of God, desist.

Return to reviews of other people’s books