You are here: Home » Beatrice Stubbs ends her career in style 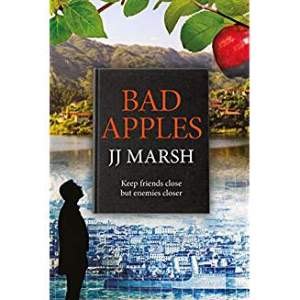 The Beatrice Stubbs series by JJ Marsh began in 2013 with Behind Closed Doors. I gave it five stars, which I really don’t like to do, but I had no choice. Four more books have followed, all worth a solid four stars, and now the series is ending with the sixth and final book, Bad Apples. I bought it the day it came out, because that’s what Beatrice Stubbs does to you, and I’m pleased to say that the series has ended as it began – with a five-star book.
The series is ending because Beatrice is one month from retirement from her Scotland Yard job and ready to depart for Devon with the long-suffering Matthew. Characters like Matthew and Adrian who have been in Stubbs’s life since the first book show up once again, reminding us that one of the strengths of Marsh’s writing is the quality of the characterisation. I don’t mean that these are deeply worked out and fully realised psychological portraits (like those of, say, Rosalind Minett) because they’re not, but they do rise above the cardboard cutout caricature. You believe in them while you’re reading about them, and that’s what counts.
Plotting has been a strong feature of these books since the first and that holds true to the very end. However, what really marks Marsh out from the rest is her ability to build a feeling of dread so that you have to read on because you are desperate to know that the thing she has made you fear is not going to happen.
I don’t know what Marsh plans to do now that Beatrice is retiring, but I am sure of two things: that she will continue to produce high-quality novels, and that I will continue to read them.

Return to Reviews of Other People’s Books