You are here: Home » Offensive? Moi? 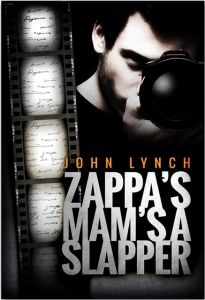 I am not someone who likes to get up people’s noses. Left to myself, I’d prefer not to upset anyone. Sadly, that isn’t possible. The title of Zappa’s Mam’s a Slapper comes from a passage in the book – this passage (from the beginning of Chapter 8): I chose the name Billy when I was eleven. It was 1999, I’d had eleven years of answering to the one my stupid mother gave me and I wasn’t going to do it any more. You can imagine the stuff I got. “Zappa’s on the crapper.” “Zappa’s mam’s a slapper.” You can probably make your own up and I’m telling you, I’ll have heard it. Zappa McErlane. I ask you. People home in on stupid names. People in authority. Every time I changed class or we got a new teacher I could see her eye going down the register and she’d be thinking, “Oh, yes. Zappa. He’ll be the one. I’ll have trouble with him.” And if they think they will, they do.

That’s how the book got its title – but a woman told me she wouldn’t read a book with the word “slapper” in the title, and nor would a lot of other women. Well, I hope you can see from the passage above that my use of the word was not meant to be demeaning to women. What’s more, everyone connected with the book so far – three editors and an agent – has been female and not one of them has been upset by the word. And, while I don’t seek to offend, I like the title and I’m not going to change it.

It isn’t only the title, though. You can read the whole of Chapter one here, but this is how it begins:
All I’d said was, I wouldn’t mind seeing her in her knickers. I wouldn’t have thought, being honest, that that merited a showdown with her brothers.
I tried to explain. She’s a bit on the chubby side, Kathleen, which I like. Not a grotesque fatty; just a bit of a plumper. Real fatties, I don’t care for. I’ve got a pic I took of a thumper sitting on one chair when three would not have been too many. I took it from behind, which is the only way you could really bring yourself to look at her. Great blue denim bulges hanging down on each side. You’d wonder how anyone could let herself get like that. Jessica made me leave that one out of the exhibition. ‘It’s an interesting eye you have, Billy,’ she said, ‘but it wouldn’t please everyone.’
I said, ‘That’s not what the instructor told us in Young Offenders. He said you should nurture your own unique vision.’
Jessica’s eye twitched. She didn’t like being argued with, and she had this ambivalence towards my time inside—it was what made me a celeb but she said it was her job to publicise it and not mine. Which is all very well, but if I hadn’t been in Young Offenders I’d never have got into taking pics. They’d run this course on digital photography (and how stupid is that? To do digital photography you need a digital camera and how did anyone think a Young Offender was going to get one of those once he was back on the street?) and I’d signed up to deal with the tension of not knowing whether I’d get out. I’d loved it.
No, with Kathleen I’d pictured her sitting on a bed in nothing but a pair of those knickers Marks & Sparks had in their adverts when they were going after the smart young people who wouldn’t be seen dead in Marks, you might as well ask them to shop in Milletts. Everyone remembers those knickers. Every man, anyway. Lot of lezzies, too, I should think. The ones coming a couple of inches down the leg and cut square. Nice patterns, interesting colours and a dark edge to waist and leg. And the models they used hadn’t exactly been short-changed in the upper body department.
Lovely. Kathleen would be sitting on the bed in these and nothing else, one leg pointing straight out in front and the other drawn up under her, arms crossed at the elbow and hands clasped so that you saw nothing more revealing than a bit of flesh squeezed each side of the arms. And she’d be looking straight at the camera and smiling. That’s one of the things I liked about Kathleen—that she was always smiling. That and not being skinny. She had a lovely smile, Kathleen.
Jessica said I had a fantastic eye for a pic, “a real intuitive grasp for composition,” which was exactly what the instructor at Young Offenders had said. And that’s all it was.
But I’d said it out loud and some mischief-making twat had told Kathleen’s brothers and they were offended. Or pretended they were.

So there you are. I’ve probably outraged fat people, thin people, lesbians and who knows who else? Maybe people who don’t smile. But it can’t be helped. It seems to me that a willingness – in fact, an active desire – to be offended has become part of our culture; people go looking for things to complain about. And what I had to decide was: am I going to write what I want to write in the way I want to write it? Or should I tailor my writing to make sure I don’t offend anyone? I think there’s only one answer to that question. It will probably lead to a lot of one and two star reviews from people who want to take revenge for what they see as a slight, but I have to let Billy tell his story his way.

Writer of historical fiction (as R J Lynch) and contemporary fiction (as John Lynch). Also freelances as ghost writer, book doctor and editor for publishers in the UK, USA and Canada View all posts by John Lynch →
Join 621 other followers