You are here: Home » The Genesis of Sharon Wright: Butterfly 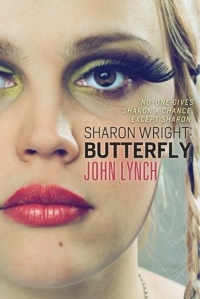 I’m asked where the character of Sharon Wright came from in a way that no one ever asks about Billy, the central character in Zappa’s Mam’s a Slapper. I don’t find that puzzling; it reflects the unwillingness of people to accept the pursuit of self-interest in a female character when it would not trouble them in a male. It’s clear that some people find Sharon disturbing. Personally, I love the woman 🙂
When my daughter was nine, we moved house. For the previous year or so she had told us that her ambition was to be a doctor; she returned home on the first day at her new school and said she planned to be a nurse. I said, ‘What happened to being a doctor?’ ‘Oh,’ she said, ‘Boys become doctors. Girls become nurses.’ I took her out of that school and sent her to one that accepted only girls and they set about the business of reinstating her ambition and sense of self-worth and making sure she kept it. I had better make it clear right now that I mean nothing derogatory towards nurses – my problem was with people who accepted that there must be limits on a person’s ambition for no other reason than that the person lacks testicles.
I actually wrote Zappa’s Mam’s a Slapper before Sharon Wright: Butterfly but Sharon Wright was published first for reasons that don’t matter here. Zappa’s Mam is the story of a young man who overcomes the disadvantages of an appalling home background, achieves his ambition and shines in the world. I wanted to write a similar book about a young woman and that book became Sharon Wright: Butterfly.
It’s true that Sharon puts herself first but that wasn’t always so – it’s learned behaviour. If she had always put herself first she would have taken the opportunity to go to college and lead, far from the place where she grew up, a life of the kind her schoolmates could only dream of. Just like Billy does. She would not have made her sad marriage to Buggy, the Loser’s Loser, and might instead have found someone to love with whom she could share a rewarding life. Just like Billy does. Only when she sees what other people are getting out of life does she begin to plot a better future for herself – but when she does begin, no holds are barred. She plans her wooing of Jackie Gough the way a female mantis might stalk the male, with every intention of consuming him for lunch when he has served his purpose. She’s helped by the fact that she understands the men in her life much better than they understand her. She says,
‘Jackie. You know what I’ve learned? Started learning when I first went to school, and went on learning? Men need to think I’m dumb. Because I’m a woman, and I’m blonde, well, men think I’m blonde, and I like to spend a lot of time on my back with my legs in the air, and I like men for what they have that makes them men, I have to be dumb. Well, I’m not dumb.’
And Jackie has begun to realise that dumb is the last thing she is. Then she says,
‘I pretend to be, if that’s the game the man needs me to play. But what I really want is to play the game where we’re both smart and we both know we’re both smart. Think you can play that game with me, Jackie? Please?’
And Jackie says he can. Because Jackie thinks he understands Sharon and he thinks she’s going to play the game his way.
Poor Jackie.
I’m on Sharon’s side. How about you?